This weeks BGOTW have some fire power:

Mira Mesa (5-2) travels to Scripps Ranch (7-0) in the “Battle for 15”. The Marauders and Falcons are tied atop the Eastern League standings at 2-0. This battle comes down to Scripps Ranch high-powered offense against the vaunted Mira Mesa D. 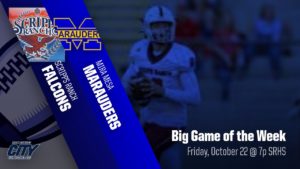 Patrick Henry Patriots take a trip to Balboa Stadium to take on the San Diego Cavers. This is a game of undefeated League opponents. PH is 3-0, SD is 2-0. Both teams have explosive offenses and shutdown defenses. HUGE game for both sides. 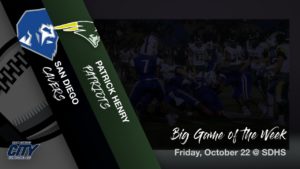 Lincoln Hornets…Madison Warhawks… that’s all the really needs to be said. These two teams are both ranked in the Top 8 in the county and if history is true will be a high scoring, hard hitting affair. This one could totally change the league standings. If Madison comes out with the Win, Lincoln and Madison would be tied in the Western League at 2-1. Next week Lincoln plays Top ranked Cathedral Catholic. Lets just say Lincoln takes down the Dons. That would create a 3-way-tie as all teams would be 3-1. HUGE GAME!