Warhawks stifle Steele Canyon on defense, offense does its job, too

Stretched across the front of the Madison High press box is a banner celebrating the Warhawks’ 2012 and 2016 state championship football teams. If the Warhawks reach their goal come December, that banner will require some editing.

With 19 returning starters, head coach Rick Jackson thinks this is a team capable of lifting another state championship trophy. 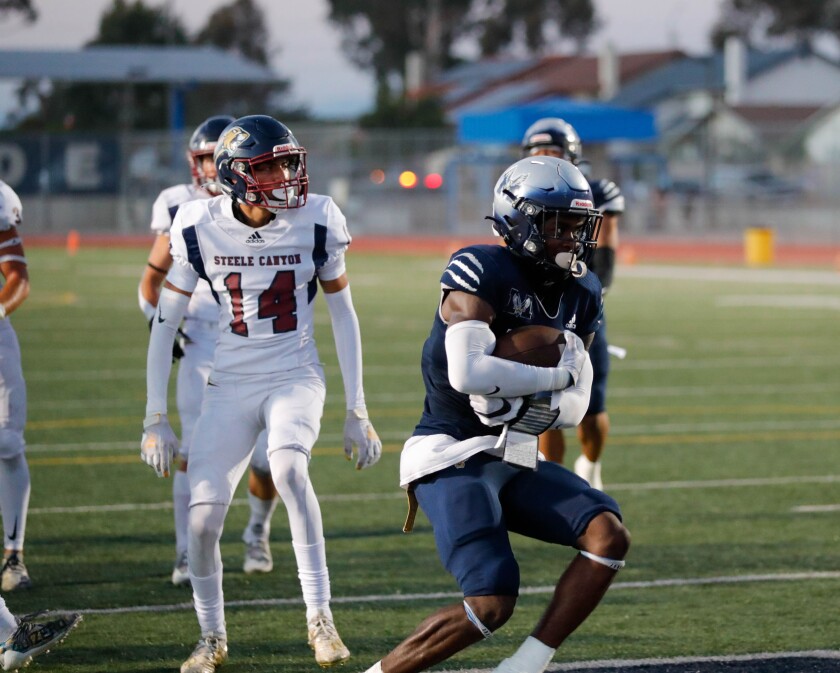 Added linebacker Berrot Rankin, “I plan on adding another one.”

It may only be the warm month of August, but No. 3-ranked Madison (2-0) certainly looked like a team bound to make a deep playoff run Friday night, walloping Steele Canyon, 35-7.

“That team has some dudes,” said Steele Canyon coach Scott Longerbone, whose Cougars dropped to 1-1. “That should be an Open Division team. (The top four ranked teams in Division I advance to the Open Division playoffs.)

“They are fast, they’re very, very good. They’ve got the depth to hang with the big boys.”

Offensively, the Warhawks demonstrated a balance that’s difficult to defend and depth at running back. Madison rushed for 283 yards on 31 carries and three TDs. Quarterback Reggie Johnson completed 9 of 20 passes for 115 yards and two scores.

Up 28-7 at the half, Madison attempted only three passes in the second half.

But it’s the Warhawks’ defense that set the tone. Steele Canyon running back Major Givens, who has committed to Montana State, was impressive, gaining 225 yards on 30 carries. But that defense flexed its muscles near the goal line, stopping four Cougars’ drives inside the red zone, twice at the 2 and twice at the 17.

“Against a team that good,” said Longerbone, “you can’t come away with zero points.”

“I do think the strength of our team is our defense,” said Jackson. “They are so fast and just tenacious.”

That defense is led by Rankin and fellow linebackers James Tivao and Lawson Minshew. Defensive tackle Mahkai Viavia spearheads a line that played “meet at the quarterback,” recording four sacks.

Madison’s lone slip-up in the first half was a lost fumble at the Steele Canyon 10 on the Warhawks’ first possession. Madison’s other four first-half drives all resulted in touchdowns.

The next series covered 78 yards across 10 plays, Rankin taking it in from 10 yards. Next, a 55-yard drive was capped by Tivao scoring from 4 yards.

Demonstrating their explosiveness, the Warhawks covered 80 yards in just 44 seconds, scoring on a 7-yard Johnson-to-Webb strike with 11 ticks on the clock.

“Our offense is really good, too,” said Jackson. “We can come at you a lot of different ways. And yes, we’ve got some depth at running back.”