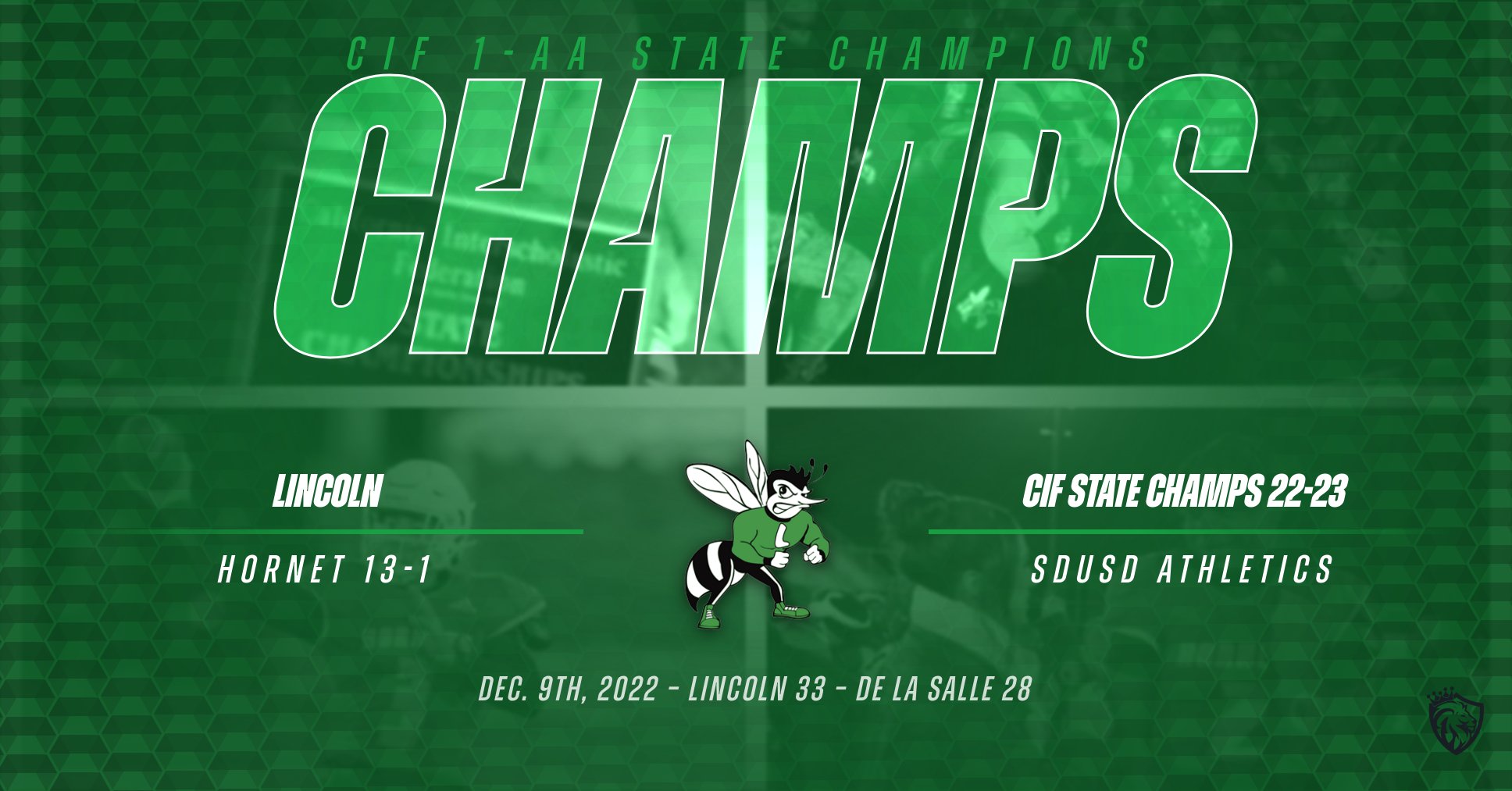 But there was one significant piece of history missing: a state football championship.

On a cold Friday evening at Saddleback College, with the temperature dipping into the 40s, the Hornets defeated fabled Concord De La Salle 33-28 to win the Division 1-AA CIF State Football Championship.

“We had guys who got hurt, hobbling out, getting treatment, hobbling back in, young guys stepping up,” said Lincoln head coach David Dunn. “We never quit.

“This will be something they remember the rest of their lives. We took care of business for the school and the community and now we’re champs. You cannot stop what’s destined.”

Lincoln finished 13-1. The win was the Hornets’ 12th straight. De La Salle, which has won seven state titles and once compiled a 151-game winning streak, finished 10-4.

It marked the seventh time De La Salle has played a San Diego Section team. The Hornets became the first to defeat the Spartans.

Lincoln pulled off the win with a heavy dose of Roderick Robinson and some clutch late defense.

The Georgia-bound Robinson, hobbled with a hamstring strain the last six weeks, gritted it out to gain 217 yards on 22 carries and score four touchdowns. The touchdown runs covered 3, 32, 2 and 32 yards.

Late in the fourth quarter, trailing 33-28, De La Salle mounted a final threat, advancing to the Lincoln 20. From there the Spartans went backwards with sophomore Munir Kassa cementing the win with back-to-back sacks.

“On the first one, I just had to get him,” said Munir. “On the second one, I was reading him. He went out and I went in. It was kind of an IQ play. It was fourth down. I had to get there.”

Asked if it was the biggest play of his life, Munir said, “Oh God, yes.”

For Lincoln, the game was a tale of two halves. In the first half, Lincoln’s offense was flummoxed. In the second half, Robinson busted loose.

On its first four series, Lincoln gained seven yards and had one first down. De La Salle was only slightly better and with 4:04 to play in the half, the game was scoreless.

Then the state championship pulled an offensive reversal. De La Salle scored on a 67-yard run. Lincoln responded with a 10-play, 75-yard scoring drive. De La Salle headed to halftime with 14-7 lead after scoring on a 6-yard run with four seconds to play.

Lincoln pulled off a comeback in the San Diego Section Open Division title game, coming from 21-6 down in the fourth quarter to beat Carlsbad 28-24. So trailing by seven at half was hardly insurmountable.

“We just dug deep, played for each other, loved each other,” said Dunn. 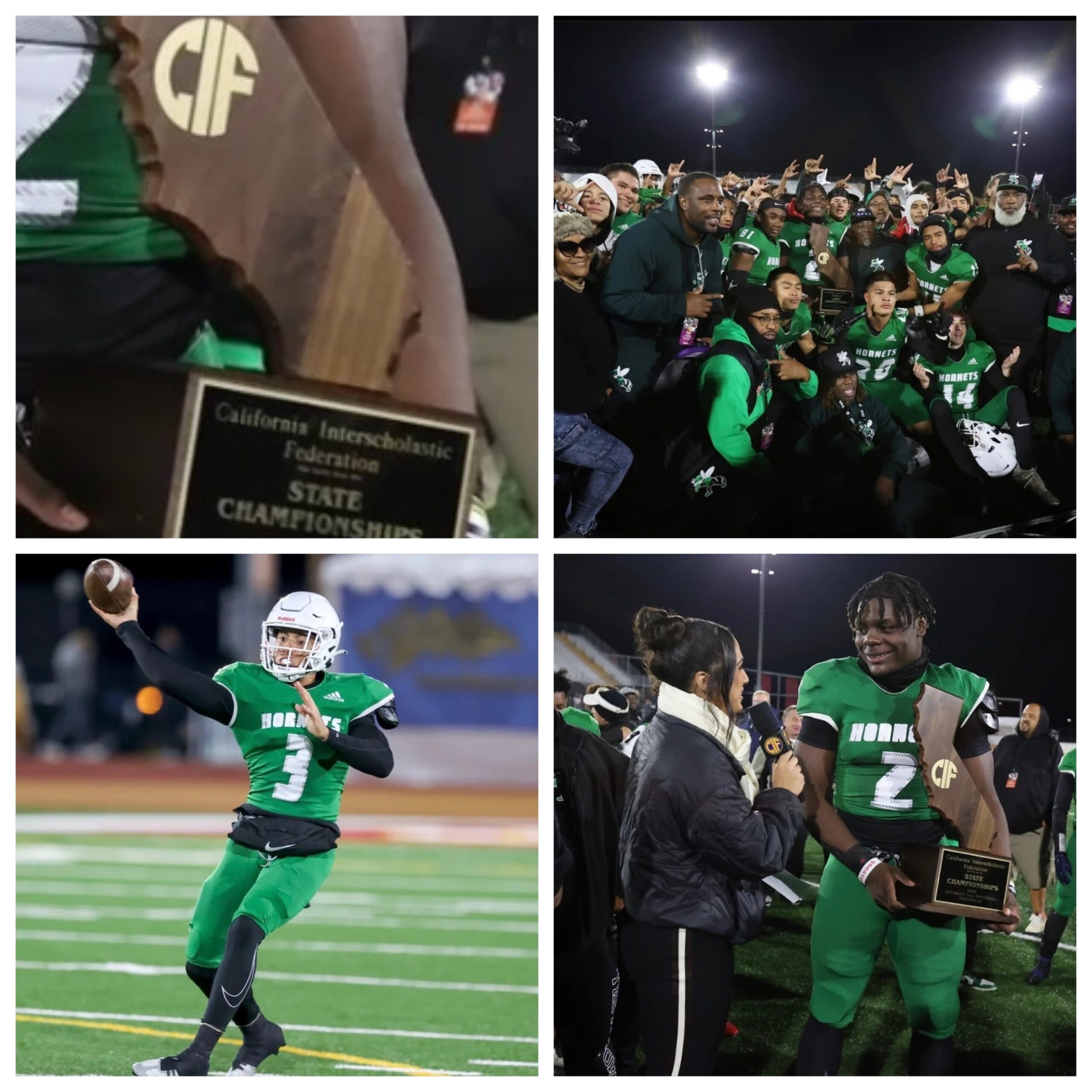 Lincoln’s first drive of the second half gave an indication of things to come. On the first play from scrimmage, Robinson broke loose for 60 yards. Two plays later, he scored from 32.

The Hornets scored 20 straight points to take a 27-14 lead. After De La Salle cut the deficit to 27-21, Robinson did his thing again, slipping away for a 32-yard TD early in the fourth quarter.

He slid to the ground in the end zone and celebrated by cranking out three pushups.

“I’m not here without my teammates,” said Robinson. “The defense came up huge. We’ve been a second-half team all year. We knew we had to put points up. We had to run the plays we’re supposed to run. We got stronger.”

The Hornets did not bus home after the historic win. Instead, they spent the night near Saddleback and on Saturday planned to celebrate their magical season by heading to Magic Mountain.