San Diego Lifeguard Chief James Gartland said the rescue was “no easy task” and involved a “heroic effort” by Black.

“If not for your quick action,” Gartland told Black, “this day could have had a tragic outcome. … I want to thank you for your heroism and lifesaving efforts.” 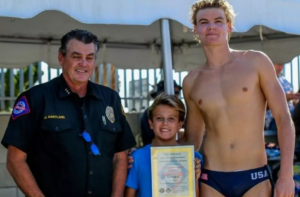 Black, an Eagle Scout and a Junior Lifeguard graduate, was surfing with friends on Labor Day afternoon Sept. 5 when he saw that the boy, Cortez Jernigan, “had been driven into the surf and the sand by powerful waves,” Gartland said.

“[Cortez] struggled to call for help as the relentless surf overcame him and pulled him back out to sea and into the impact zone,” where a wave is most powerful, Gartland said.

Black, who often is at Windansea, told the La Jolla Light, “I was shocked at the situation and knew I needed to act fast before it got worse or he got swept out.”

Black swam out and was able to reach Cortez, who was clutching his chest and saying he couldn’t breathe.

“I play a lot of sports and know what it’s like to get the wind knocked out of you, so I just told him to breathe with me, but he was losing consciousness,” Black said. “Because of my Junior Lifeguard training, I know to make sure there are no injuries or further injuries to the head or neck, so I wrapped my arms under his armpits and secured his head and got him out of the impact zone.”

Once he was able, Black picked up Cortez and walked closer to shore so he could call to lifeguards for help.

“I helped them get [Cortez] stabilized and they went through their process [of tending to him],” Black said. “I’m just glad I was there to help any way I could.”

And for that, Cortez’s mother, Stephanie, is appreciative.

“My family is forever grateful,” she told the Light. “He is an amazing young man that younger kids can look up to. I know Kiefer will continue to do great things in his future.”

“It could have been a lot worse,” she added, noting that Cortez only experienced bruising and soreness. “We are very lucky.”

Cortez also is a frequent surfer at Windansea, saying he is there four times a week. But he said he “learned a good lesson to be aware” of changing conditions.

“I like to surf and bodysurf, so I was out with my friends for a while and this rock got exposed that wasn’t there when we went out,” Cortez said. “I landed right on it. I got the wind knocked out of me for longer than I ever had. I was very scared for my life. I didn’t know what was going to happen.”

He said he’s grateful that Black was able to help him and that he stayed with him until his parents arrived at the beach.

Cortez attended the ceremony to honor Black because “I wanted to show my respect and appreciation … that he was there.” ◆